The Next Stone Tablet

super cool stone tablet about the size of a mobile phone!

I imagine somewhere around the first century AD, some scholar scratched his beard and said "Nothing will ever replace the comfort of reading cuneiform on a sun-warmed stone tablet." The guy next to him most likely agreed. "This bright velum, it hurts my eyes." he complained. 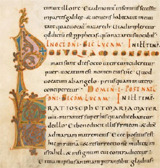 illuminated manuscripts are just wicked cool. Deal with it.

Perhaps five hundred years later, somewhere towards the end of the 15th century, I'm certain that some respected monk uttered, "Who would not prefer the personal feeling one gets from a codex, to this new and miserably cold movable type?"

Steins of ale were raised and everyone pronouced movable type as doomed without a doubt.

Movable type, doomed to failure for sure.

When The Times of London first moved to the steam-powered presses from Koenig and Bauer in the early 1800's,certainly   more than a few people complained, "it lacks the personal touch of the hand cranked press and therefore will never amount to much."


Without nary a doubt, every information delivery device eventually gets replaced simply because they need to be replaced.

Two hundred years after the Times of London was able to print an astounding 2,000 copies every hour, we now hear a forlorn chorus of, "Magazines and books will never go away. Can you imagine this electronic tablet replacing my sunday paper? It'll never happen, I tell ya."

What we know: Everything that outlasts the forces that made them economical and valued is scribbled into the history books with little to no fanfare. Remarkably, everyone adapts accordingly and we all carry on, somehow or another better off than before.

The Plastic Logic reader - the next super-cool stone tablet?

So, What's holding up the promise of the next stone tablet? Why aren't publishers jumping up and down to get into the game? Remove the costs of printing and distribution and make more money, right?. Seems like a no brainer to most people.

At least part of the answer to why this isn't happening faster seems to be very short and surprising: The Kindle. Indeed,  A July 9th article in Bloomberg  by Joseph Galante and Greg Bensinger sums up the monopoly conundrum that Amazon has created fairly well - worth reading for sure. The Bloomberg article quotes Brian Murray, chief executive officer of HarperCollins as saying, "Publishers and authors want to make sure there’s healthy competition so that Amazon and Kindle don’t become the equivalent of Apple and iTunes". Will that happen? Does Harper Collins or any other publisher get to decide how the chips fall?

Other players are arriving to potentially start leveling the field, but will they find themselves in the same boat as competitors to the ipod once they actually get out of the gate?

The next stone tablet, for sure.

One of the continually promising prospects which arrived on the ebook scene with full press-release force in early 2007 (after seven years in development) when they raised £52 million of equity finance to build a production facility in Germany, is Plastic Logic. The device hinges on a truly brilliant innovation based on polymer semiconductors. Hopefully they're not arriving arriving three years too late to change the game, even with their Barnes & Noble deal and the AT&T partnership now in play. We'll see. The promised launch is next year. Thus far, the press release drum beat from Plastic Logic are oddly focused on "Catching Kindle", which is what some marketers call the "me too strategy", sounding a bit like the fighter talking trash who's going to face the champ without a fight under his belt yet.

My money says that if Plastic Logic wants to change the game, they need to give the device a name people can take ownership in ("I want a Plastic Logic" just doesn't work for anyone I know) and stop comparing themselves to the competition (Did Nike ever say they wanted to catch Converse?). 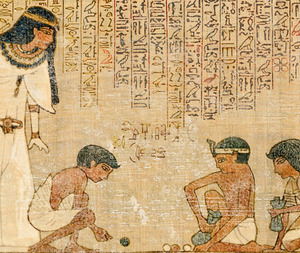 Papyrus? What the heck were they thinking?

What we know for sure: Stone tablets, papyrus and velum are soon to be joined by wood-pulp pounded into paper in the "what the heck were they thinking" footnotes of history. How does it all eventually happen?  Who comes out on top? Who goes broke as a consequence? No clue. Does anybody remember the winners and losers when movable wooden type was replaced by the superior movable metal type? I think the answer is, "who cares...move on".

Yes, color in case you missed this back in late March:
Color e-ink, e-book:  the Flepia from Fujitsu