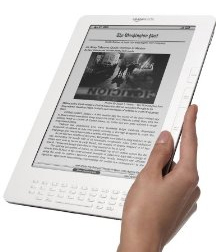 The Kindle DX E-Reader from Amazon

At the certain risk of over-extending my welcome with the publishing for profit theme,  I want to report with a certain sense of excitement mixed with an undercurrent of frustration that the Kindle DX E-Reader (to be released this summer) has been announced just 3 months after the Kindle 2 arrived at market. The DX E-Reader is 10.4" x 7.2" x 0.38", with a display size of 9.7" high. That's 250% bigger than the Kindle 2 device. Sticker shock: $489 a pop as opposed to the Kindle 2 at $349 (same price as the original Kindle). Aren't electronics supposed to get cheaper every year?

"We knew for more than a decade that one day an e-reader would be a significant platform for distribution for our content," is what Arthur Sulzberger Jr (chairman of the New York Times) said at the release party of the DX E-Reader in NYC last Wednesday. "The Kindle DX is an important milestone in the convergence between digital and print," so said Sulzberger, "It significantly enhances our ability to reach millions of readers."

The New York Times, The Boston Globe and The Washington Post, will apparently act as resellers for the device, offering a reduced price on the Kindle DX in exchange for a long-term subscription as long as you don't live where their paper editions are available (which seems to imply that nobody will actually get this deal unless they live at some remote outpost on the frozen tundra). As with most things Kindle, specifics were in short supply.

Amazon never reveals how many Kindles have been sold. You get precious little hard data from the publishers either, except to hear chest-thumping sound-bites like "sales of E-Books are up 400% since last year!!!", which translates into: maybe they sold ten ebooks last year and fourty ebooks this year.  Why all the secrecy surrounding Kindle sales and E-Reader sales in general? After rumaging around through the available data, I think I may have at least part of the answer.

Mac vision by Isamu Sanada (who else?)

The facts are that the Kindle and other E-Readers remain elite products and are in no way promoted as mass market consumer items - partly because of their steep price, which may in fact be largely intentional. The bottom line for right now is that printed books make 5 to 10% higher margins than their digital counterparts, so a cheap E-Reader on the market may in fact be currently viewed as too disruptive. Jeffrey Lindsay,  of  Sanford C. Bernstein says "They (Amazon) don't want to antagonize the book publishers and they don't want to cannibalize their own book sales". What this means is that Amazon can't risk lowering the price on the Kindle, simply because it might take an unhealthy chunk out of their current profit margin in books made of good ol' paper.

In spite of the bizarre economic forces at work the rumor mill seems unanimous at this point that Apple is poised to launch a tablet next year. Back in March, Rueters reported that Apple had ordered ten inch touch screens from Wintex, which is the same company that currently makes the screens for iphones. Apple arrived late to the game with both the ipod and the iphone but have created enormous success stories with both. There's no reason to doubt they can do the same with a tablet capable of delivering books as well as other rich media, but don't expect it to be cheap. The upside is that at least Apple doesn't sell books made of paper and doesn't need to concern itself with profit margins from that revenue stream. 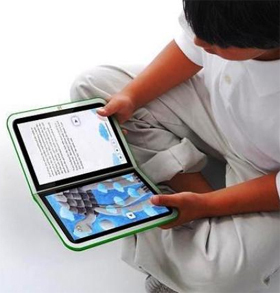 Mockup of an OLPC Tablet

The future has not arrived yet and the present kinda just actually sucks
The implication of the Apple rumor is that they seem to be betting on their existing touch screen technology as opposed to the Kindle, Sony and upcoming PaperLogic solutions which all rely on E-Paper. The touch screen we're all familar with has the advantage of color and speed, but the readability isn't nearly as sharp as E-Paper, which is currently limited to black and white. Recent advances at the Novel Devices Laboratory at the University of Cincinnati have proven that color is coming to E-Paper soon. GammaDynamics is the commercial arm of that project, and it's pretty cool stuff. Another strong contender in the display race might be Pixel Qi which was started up by Mary Lou Jepsen. The Pixel Qi (pronounced Pixel Chee) solution is multi-purpose with a full-color LCD mode, a low-power reflective e-paper mode and a low-power basic color transflective mode. Another contender for hearts and minds of display might be Philips. For years, Philips has been promising color e-papers and so far, none of them have arrived. Last week, they did it again with an entirely different approach to the problem that looks just a bit more promising than all their other promises. 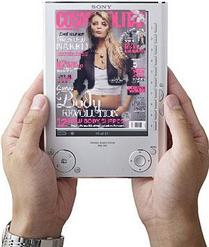 Hearst Publishing has been a long-time investor in E-Paper tech. Perhaps, maybe, who knows yet if their own E-Reader (under tight wraps and a shroud of inscrutable mystery for over a year now) can emerge as a true contender, or Hearst is just another paper profiteer that will release a device no one wants to pay for. CNN Money (Fortune) reported in February that Kenneth Bronfin, head of Hearst Interactive insists that "these devices will be a big part of our future". I honestly hope so. I also seriously doubt it.

I'm one of those people who just take it for granted that we'll read everything one day on some sort of electronic tablet. It's not a matter of "if it will happen", it's just a matter of "how it will happen". Jeffrey Di Leo, editor and publisher of the American Book Review may have summed up the current state of affairs best when he recently said we're "caught between our digital destiny and our printed purgatory".