We've all read a lot of hang-wringing editorials about the demise of print and been equally subjected to the same lament about editorial content on the internet as well. Everyone seems to agree on one dreary fact: Editorial content can't make money in an information-rich world where everything is free for the Googling.

A recent article in Time Magazine by Josh Quittner has been on my mind a lot lately. The article, The Race For a Better Read does a few things which are remarkable and right out in the open: Begging, confessing the obvious in public, and finally, offering an actual solution that I can relate to.

First off, it's an article that starts out asking for a dime (in the online version). I think this is funny, but only in a sad sort of way.

Secondly, Quittner goes on to confess the obvious: Online editorial content isn't making any money for the owners. In an odd new world where the print side of journalism can't rub two nickles together and their online counterpart doesn't deliver the cabbage either, Quittner asks a timely question: What's next? 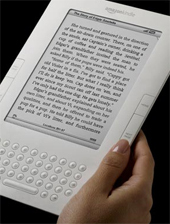 Quittner suggests the way forward starting with Kindle and Beyond (his article published before the release of Kindle 2.0, pictured left). Kindle from Amazon, for those who have been living in refugee camps or inside the Washington beltway for the last couple of years is a hand-held book interface, an information retrieval device with a very simple proposition. That being, I will store your library of books, show them to you any time and also buy them for you as well. The concept is not much different from iTunes relationship to the iPod. It's an application in your hand, capable of delivering the content people want for a price people are willing to pay.

The beauty of Kindle, much like the iPod, is that you do not have to be connected to the information grid to enjoy the content you have purchased. You can enjoy it anywhere - trains, planes, automobiles, sofa or bed, it's all yours anywhere you go.

Kindle is a huge success story in the making. It proves that people are willing to pay for digital content ($10 per book right now) if the process of obtaining and paying for that content is easy to understand. Capitalism being what it is, success stories get noticed quick. Sony decided it wanted to play by introducing it's own book reader, which by most accounts isn't as friendly as the Kindle but at least proves the point that there's a rapidly emerging market for pay-as-you-go digital content. 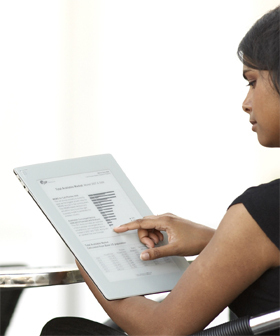 Enter Plastic Logic, due to be released in 2010 (hopefully with a better logo and an actual brand name people can take ownership in). It's much larger than the Kindle, measuring in at 8.5 x 11 inches, compared to Kindle's 8 x 5.3 inches. As with any innovation that proves itself, we're going to see cheaper and more powerful eBooks arriving sooner rather than later. Yes they will have color and yes they may even feel more like paper.

Adobe Air is finally coming into it's own as well and may point the way to the real future for handheld applications that deliver content that's easy to pay for and worth the price. I downloaded  The Time 100 Air Application (lots of our favorite Drawgers included in it, BTW) and really enjoyed it. I can easily see a day when Time could ask my handheld eBook if I want to store their next 20 issues for a buck fifty. My index finger would point to yes and I think a lot of other index fingers will do the same.

Where I think Quittner stumbles is when he imagines a world where a news article is worth a dime - or a world in which anyone will be willing to pay for one article at a time. This is the same idea that Quittner originally bounced back in 1995 in his Way New Journalism article for HotWired. That didn't happen and it's not going to happen.  What's going to happen is what's happening right now with the proven model of the Kindle. People will gladly pay for rich content that they can take anywhere, but are they going to pay for it one page at a time? Not now, not never. 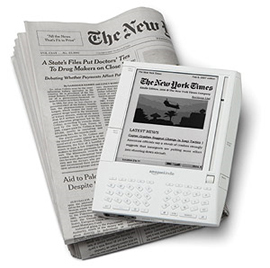 I'm also surprised that Quittner failed to mention the minor success stories that newspapers are already beginning to realize in delivering paid digital content. The International Journal of Newspaper Technology reports that the largest selling newspaper on Kindle is USA Today. The price that people are willing to pay? $12 a month! The second most popular newspaper at Kindle is The New York Times at $12.99 a month. The number of actual subscribers are stored in a secret vault, but no matter what those numbers are - they are real subscribers, happily willing to pay for editorial content that doesn't leave ink on their fingers. Will those number grow and grow? You bethca.

David Kaplan, reporting at PaidContent.org from the American Society of Magazine Editors Awards yesterday writes that the editors he spoke with all "seemed to feel a need to mention the 'dignity of print' and that even in the digital age 'print has value'.” I think everyone can agree with that. Print will never disappear. The reality is there are compelling alternatives arriving that have the real potential to be more profitable than our old pal, paper.