Ba Ba Ha Ha is back! 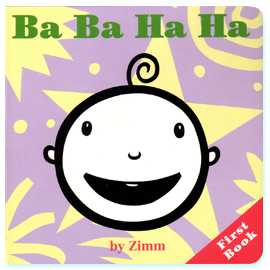 In 1996, Harper Collins published a little board book that I did for babies and toddlers called Ba Ba Ha Ha. One year later, after selling about 20,000 of them, Harper decided that printing board books was too expensive and took the book out of print.
In the years since, I have received hundreds of letters, emails and even phone calls asking if the book was still available. All I could do was refer them to Amazon, where "slightly chewed" copies were selling at prices of over $100.
Earlier this year I decided I was finally going to do something about the situation, take matters into my own hands you might say.