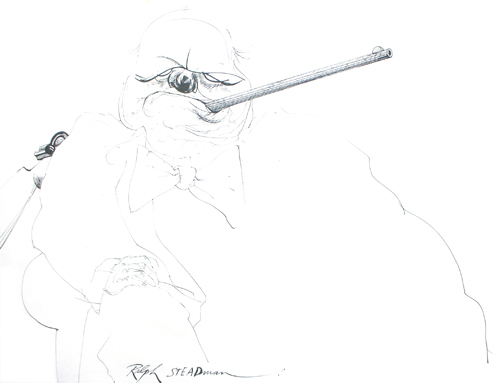 a photo of the Steadman print
The first real job I ever did for a real magazine was in 1978 for Mother Jones Magazine. I was living in Oakland at the time, and I rode my little Yamaha 400 across the Bay Bridge in gale force cross-winds with the illustration in a backpack. I arrived at Mother Jones and handed over the art to the art director (can't recall her name).

She said she liked the piece very much, but that there was a slight problem. That being, Mother Jones didn't have any money to pay me for the job. I don't mind saying I was counting on the money to pay for some much needed food at the time and the news came as a serious blow to my complaining stomach.

The art director asked, "Do you like Ralph Steadman?" I said that indeed I did. She asked me to follow her and I was escorted to a room where there were perhaps 10 or more signed prints of Steadman's spread out on a table. She asked if I would accept one as payment.

After picking out a print, she provided me with a mailing tube which I bungied to my little Yamaha and faced the cross-winds of the Bay Bridge home.

The print, signed in pencil below a printed signature and numbered 56/100 depicts J. Edgar Hoover and has hung in my house ever since.
Topical: Whatever