DECEMBER 15, 2006
It's no secret that print editorial, faced with a lot of entertaining competitors, is losing market. When the topic comes up, my suggestion for regaining momentum is simple. Offer something that no other medium can deliver as effectively: remarkable illustration paired with outstanding writing. Make it a product people really want to look at first, then seal the deal with compelling content. My concerns for print have mostly dwelled on a lack of foresight on the part of editorial management. Instead of more art, I see less. Instead of better content, it seems to get worse. Poignant art as a necessary ingredient for catching eyeballs, starting conversations and staying competitive and relevant in a changing world doesn't seem to have many buyers. Why is this the case? To me, it seems fairly simple. If you want to compete, do what you do best. It's easy to lay blame at the doormat of lack-luster and unimaginative management. They're a big target and easy to hit. But, there's plenty of blame to spread around. Imagine if some of it falls squarely at the feet of the illustration community, itself. I started imagining that recently and it wasn't a fun exercise. Anyone involved in the commercial illustration boom of the 1980's and 90's will fondly recall those salad days of cash and plenty. They were good times, but good times can breed complacency. The world of entertainment has changed dramatically, while you could argue that the basic assumptions about what illustration should deliver to an audience has stayed fundamentally the same. Illustration can still offer decoration, of course, but the demands for interpreting hard editorial content with skill and insight should be on the rise. I don't see that happening. Perhaps I'm expecting too much? I see more of the same salad day reruns. A good example of rising editorial standards is Forbes Magazine. Forbes, as anyone in the illustration racket knows, has been a long-time supporter of great illustration. They've used it well and in abundance. At the same time, Forbes has also consistently contributed hard-hitting and provocative editorial views. They remain a class act. The quality of journalism in Forbes has risen and in that regard they seem to be meeting the challenge of a new world. I look forward to it arriving. When Forbes exposes corporate corruption, poor practices and outright fraud, they often turn to the best illustrators in the business to help them tell the story. Their instincts are right. Illustrations should be able to aid this type of important content. As I was doing a casual browse through the last year in print for Forbes however, I was disappointed in the art. I didn't find even one example where the art came close to hitting as hard as the content. It was an unsettling realization for me. I say this knowing full-well that I am referring to the hard work of esteemed colleagues that I both know and admire. So, I'm a cruel SOB. I will loose friends. I don't care. 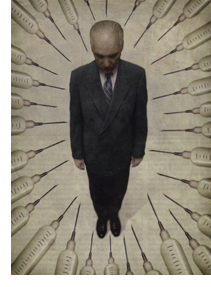 Matt Mahurin for Forbes
Here's an example of where I'm at, and I'm using an illustration that I personally thought was one of the best that Forbes commissioned this year. In the October 30, 2006 issue, Forbes took a brutal look inside Emgen, a biotech sector business that supplies life-saving and vitally needed medications for cancer patients. Forbes pulled no punches - they exposed a corporate climate that is genuinely creepy and quite likely corrupt. The article stuck with me for weeks and it started a lot of conversations for me. Forbes commissioned Matt Mahurin for a full page to accompany the remarkable story. Mahurin, as many will agree, is a long time professional and well regarded for good reasons. His illustration solution? A bunch of needles, wonderfully executed, pointing accusingly at the CEO of Emgen. It had every single element that I would normally enjoy: High concept, arresting composition, limited palette and very well executed in a unique voice. It had everything. Yet, for some reason I wasn't satisfied in the same way that I used to be satisfied. I wanted more.
The article itself was a huge conversation starter for Forbes. Why couldn't the illustration do exactly the same? Am I expecting too much? I hope I am not expecting too much. I'm a consumer. I just want a better product than the one that satisfied me in the 1990's. If they're smart (and I think they are) Forbes is asking themselves how the art they commission is doing anything more than decorating their pages at this point. I think it's important for illustrators to have that same conversation, as well. The articles themselves often have enormous impact, they start important conversations and actually move markets. Why can't the illustration contribute to the same conversations? They should, but right now they don't. I put all this out there as a consumer only. I'm not a critic. I don't have a masters degree in anything. I don't ever want to sit on a panel of judges. Perhaps I'm just a crabby and unsatisfiable consumer that should be ignored. I can live with that. Editorial print will survive, I'm convinced. I also believe that illustrators need to be an important ingredient for survival and growth. How that happens, I'm not sure. With that said, I honestly detest people who raise concerns without having a viable way forward.
Topical: Complaining